March 16, 2019March 16, 2019 ~ eatatlus ~ Leave a comment
In this video, I test a gadget that purports to make tasty, crisp fries in the microwave.  I also injure myself so badly that I have to see a sports medicine specialist on Tuesday, so…. yeah, that’s a thing that happened.
Here’s the TV advertisement:
June 25, 2016November 18, 2016 ~ eatatlus

In this episode, we explore the history of Spam while making Spam Upside Down Pie. This episode also takes a look into why it’s so popular in the Philippines, Hawaii, and Korea.

CBS News.  As Food Prices Soar, So Do Sales Of Spam.  http://www.cbsnews.com/news/as-food-prices-soar-so-do-sales-of-spam/

June 4, 2016November 18, 2016 ~ eatatlus ~ Leave a comment
In this episode, I cook three savory Jell-O recipes and talk about the rise and decline in the popularity of Jell-O salads through the twentieth century.  The recipes are Gazpacho Salad, Cucumber Sour Cream Salad, and Tuna Salad. It was an interesting experiment.

References for this episode:

The Art of Cookery Made Plain and Easy by Hannah Glasse (1747) – Available from Archive.org

A Social History of Jell-O Salad: The Rise and Fall of an American Icon by Sarah Grey.  http://www.seriouseats.com/2015/08/history-of-jell-o-salad.html

Jiggle It: The History of Gelatins, Aspics and Jellies by Nate Barksdale http://www.history.com/news/hungry-history/jiggle-it-the-history-of-gelatins-aspics-and-jellies

In this episode, I make two recipes from The 2-in-1 International Recipe Card Collection published by Random House in 1977.  On the front side of the cards in this collection, there are recipes for mixed drinks and on the back there are recipes for hors d’oeuvres. I’ll be using recipe card number 208 which is in the rum section.  This card has three recipes, but I’m only going to make two: the banana daiquiri from the front of the card and bananamole from the back.  While preparing my ingredients, I talk about the history of the Cavendish banana and some of the issues with the global demand for this particular variety. 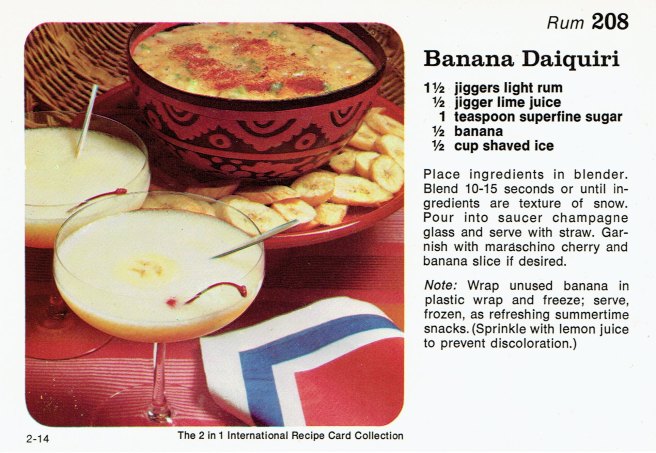 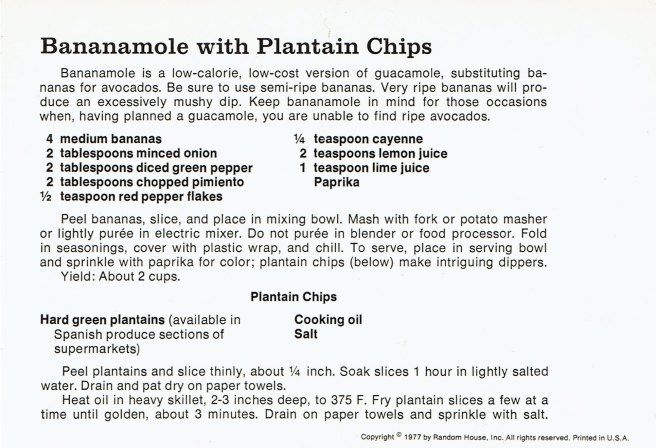 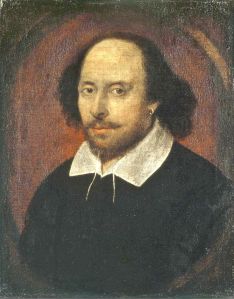 To celebrate Shakespeare’s 452nd birthday and the 400th anniversary since his death, I cook up two dishes from his era and talk about the food eaten during the Elizabethan/Jacobean periods. The recipes from this episode come from The Good Housewife’s Jewel by Thomas Dawson, originally published in 1596.

The recipes I made are pease pottage and chicken in a caudle.  The foundation of both recipes came from Thomas Dawson’s The Good Housewife’s Jewel, but I did make alterations.  The recipes in the book were very vague so I was mostly winging measurements.  Below are the closest approximations that I was able to manage.  You may need to adjust the recipe to suit your needs. 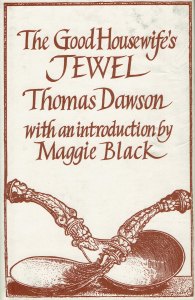 Put the peas and water in a slowcooker on high/medium high.  Let cook for 5 hours.  Add the other ingredients.  Cook for an additional hour or two.  Serve with malt vinegar.

Simmer the barberries, currants, prunes, wine, and spices in a small sauce pan until the fruits are softened and some of the liquid has evaporated. Remove from heat. Slowly whisk in the egg yolk so it doesn’t curdle. Add chicken and let sit.

While the fruits are cooking, prepare the crust. Combine the flour and butter. Slowly add the water one teaspoon at a time until the crust holds together without crumbling. Separate the dough into two balls – one consisting of 2/3 of the mixture and the other 1/3 of the mixture. Roll out the larger ball until it is about 7″ in diameter. This will be the bottom crust. Roll out the remaining dough until it is about 3″ in diameter. This is the top crust.

Take a drinking glass or tumbler that is about 3″ in diameter and cover the outside of the class with plastic wrap. Place the glass, bottom down, in the center of the bottom crust. Carefully shape the dough around the bottom of the glass working the dough about 2 inches up the sides of the glass.

Fill the bottom crust with the filling and place the top crust on the pie. Crimp the edges so a seal is formed between the top and bottom crust. Poke a 1/2″ hole in the center of the top pie crust.

Bake at 400 degrees Fahrenheit for 30 minutes. Drizzle red wine vinegar into the hole until it is full. Bake for an additional 30 minutes.

This is best served cold.

In this episode, I make a recipe from the McCall’s Recipe Card Index called “Ham and Bananas Hollandaise” and talk about the history and science of hollandaise.  You can probably predict how the recipe turned out.  This episode is a cautionary tale about the follies of recipe card authors.

In this episode, I make three British wartime recipes: Ohio Pudding, Savory Potato Cakes, and Chocolate Truffles.  I also talk about British rationing during World War II and why the program was successful.

In honor of St. Patrick’s Day, I make Colcannon, talk about the history of potatoes in Ireland, sing a little folk song, and discuss a vegetarian cookbook authored by a man named Dr. Thomas Allinson.

The recipe that I use is from a book titled Dr. Allinson’s Cookery Book Comprising Many Valuable Vegetarian Recipes which was originally published in 1915.  It is available for download on Project Gutenberg here: https://www.gutenberg.org/ebooks/13887

In this episode, I celebrate my annual Macaroni and Cheese Day by making a delicious batch of baked macaroni and cheese from the 1973 McCall’s Great American Recipe Card Collection.  This episode discusses the possible origins of cheese, how cheese has changed through the ages, a little bit of science, some archaeology, and Charlemagne’s reaction to blue cheese the first time he ate it. 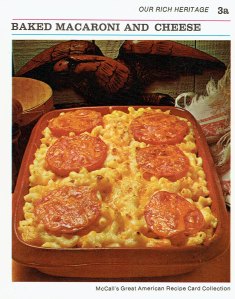 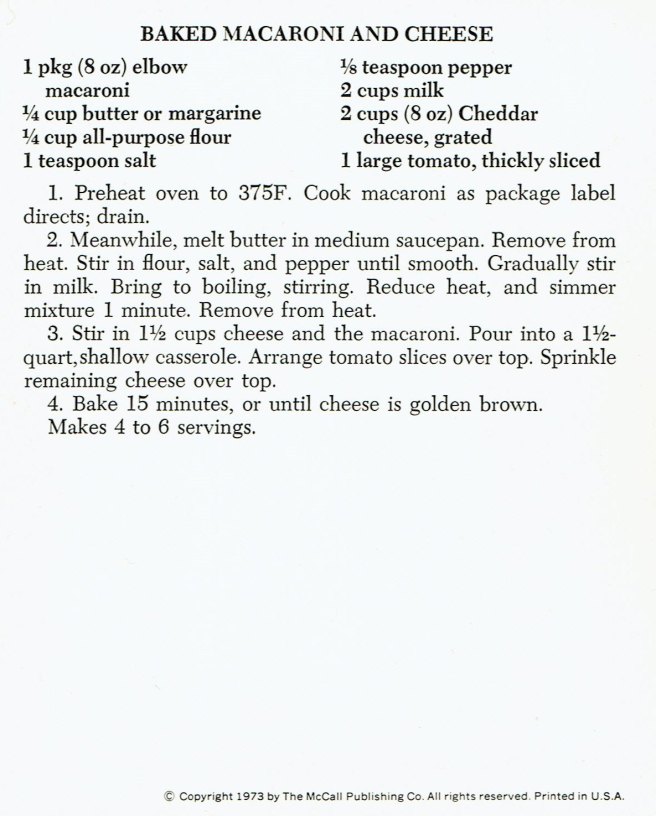 Recorded on Superbowl Sunday, Lisa makes an embarrassing confession as she bakes Apple Bread from the Betty Crocker Recipe Card Library.  While cooking she talks about the difference between enriched bread dough and having inclusions in the bread.  She also talks about the history of Betty Crocker and theorizes why recipe cards indexes became so popular in the 1970s. 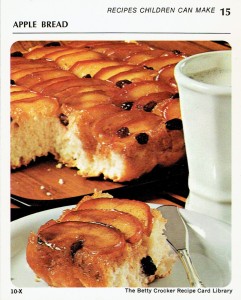 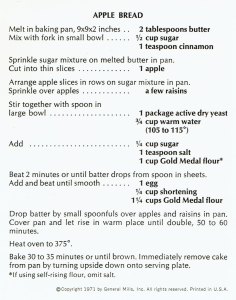 The original recipe card.  I would reduce the baking time just slightly.  My apple bread was a little over baked even though I only baked it for 30 minutes. 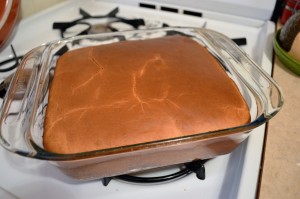 Turning the bread out onto a plate was a bit scary, but it came out ok.  If you make the dish, remember to run your knife around the perimeter of the cake to help separate it from the baking dish. 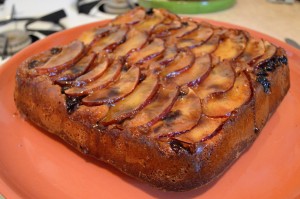 My apple bread doesn’t look nearly as nice as the one in the original picture, but I blame that on it being a bit over baked. 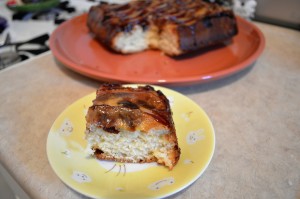 It may not be pretty, but it sure is delicious.  I couldn’t remember the name of the apple I used when I recorded the episode, but I checked later.  They were gala apples.  They had a slight tartness which worked well with the sweet caramel.

Eat at Lu's
Create a free website or blog at WordPress.com.