In this mini-episode, I make Flaky Biscuits with a recipe from the book Microwave Cooking for One.  While making biscuits, I talk about the science of flaky, golden brown biscuits.

This recipe called for some specialized equipment in order to achieve a golden brown exterior.  I found my Corning Microwave Browning Skillet on ebay, but I have seen them at thrift stores and yard sales.  The Microwave Cooking for One website talks at length about the Browning Skillet: https://www.microwavecookingforone.com/Charts/Browner.html

The technological advantage that Corning’s Microwave Browning Skillet has over other microwave cooking vessels is its heat conductive coating on the bottom.  Pictures of my browning skillet can be seen below.  The grey area on the bottom is the special coating to help promote browning. 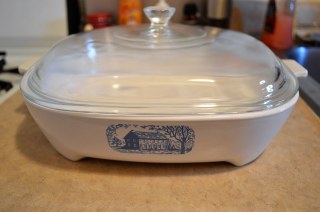 The skillet did promote browning; although, the browning was uneven and the quality was not nearly as high as I could have achieved in the oven.  At least the biscuits were flaky. 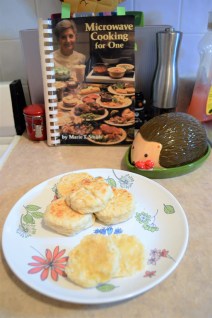 On the mess scale, this recipe was not terrible.  Aside from a few measuring cups, I only dirtied one bowl, a microplaner, the countertop, a fork, 3 mise-en-place bowls, a biscuit cutter, and the Browning Skillet.  Definitely less of a mess than last week.